With Plutocracy on the March it's doubtful that a 'public option' will be included in the president's Health Care Reform bill.

Yet without it, what have the millions of uninsured and under-insured gained if the legislation passes? Max Baucus is tainted with conflict of interest issues so who can trust him to act on behalf of those who need the reform most of all?

Also, I've been posting this morning at Stars Over Washington and on my other tapestry blog, Jude's Threshold, a blog whose name is an astrological reference to Saturn as the Guardian of the Threshold.

For me personally this describes having restrictive Saturn in the 12th house of the Unconscious where Mr. Control applies himself to thoughts that swim up from the Collective Unconscious, and from my own unawareness, into consciousness.

Maybe that's the origin of Dreamyfish Art, an online Art Gallery which I began in 2005 to display (Neptunian) fish drawn as botanically correct (Saturn) as I can make them but within scenarios of their private dreams (Neptune) under the sea (Neptune) - as you know, Neptune rules the oceans.

This echoes having natal Sun ruled by Saturn (Capricorn) and Moon ruled by Jupiter/Neptune (Pisces.) Pisces is a very creative sign, and drawing is my preferred outlet. And I like to write sometimes, too.

Cosmic Persona Designs was created to show the racier elements of my artwork with a bow to the 'cosmic persona' of any Astrology chart, the Ascendant, which is the sign and degree that rises as a person - or thing or event - are born. The Ascendant represents the mask/s from ancient Greek tragi-comedies, and in Astrology we 'speak through the mask' of the Ascendant as did Greek actors centuries ago.

The Ascendant's sign shows how we view the world and how the world views us, and along with our Sun and Moon positions, is considered one of the three most important points in a horoscope.

And I suppose that Secret Moon Art describes itself as a gallery for Children's, Fairy, Moon, Cosmic, and Botanical drawings, so it needs no further explanation!

Then there's Lim's Limericks, a typing arrangement I got myself into by way of my cat, Lim, and his excellent if elusive friend, Mr. A. Cat, whose precise whereabouts continue to remain a mystery.

Who knew cats could be so political? I didn't, did you? 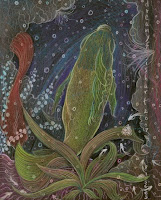 Image: a fanciful illustration of the two fishes of Pisces, by jude cowell 2009+

Update 2:15 m edt: Astrology of Health Care Reform 1994 vs 2009 is now available for reading by both of you. Will history repeat? jc

Atlanta News Alert at Noon: local TV stations are reporting that a 'suspicious package' has been delivered to a MARTA station in Buckhead and the area is shut down between Peachtree Street and Lenox Square Mall (where I once worked while attending art school.)
Posted by Jude Cowell at 11:25 AM