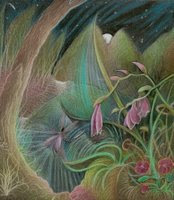 On Thursday June 21, 2018 at 6:07 am edt arrives the annual Summer Solstice, the DC Horoscope of which may be seen set for the moment the Sun reaches 00Cancer00, a Cardinal World Point of manifestation. The Moon (the public) is in Venus-ruled Libra, a sociable position for Luna. This blend of luminaries provides clues concerning the general cosmic weather of the day and for Summer 2018 which promises a season of perception, romance, idealism, and improvements in social awareness.

Intellectual powers of observation and expressions of divine discontent may also surface from the Collective Unconscious along with some people's natural sense of justice which may be satisfied or neglected as the summer season sizzles by, plus, the exotic or unusual may take a bow here and there. Detached attitudes will feel necessary at various points and 'alone time' will, as always, be prized for some while others use their lively personalities to beguile and gain public attention. Additionally, family life and patriotism (Cancer) blend with relationships, alliances, art, and diplomacy (Libra) on our Collective Summer 2018 calendar while the creatives types among us finish up their original projects for public display and appreciation.

Cautions of the conscious/unconscious Sun Cancer-Moon Libra combination of Water and Air energies include perfectionism which can lead to nitpicking, nagging, complaints, and dissent, and a leaning toward placing the focus on trivial details in order to distract by stirring up storms in tea cups!

A few famous natives who were born under the Moon-Venus influences of the Sun Cancer-Moon Libra blend include luminaries such as Alexander the Great, fashion designer Pierre Cardin (chart shown), Janet Leigh of Psycho fame (chart shown), Sylvester Stallone (ditto), and my favorite inventor of all time, the brilliant Nikola Tesla. Follow the link for an interesting video concerning Tesla and secrets hidden in Egypt's pyramids if you're curious); plus, here's a view of the natal horoscope of Tesla (RR: B).

Now don't be surprised if you hear one or two of their names and/or creations mentioned during Summer 2018!

image above: Gladiolas in Moonlight w/ Flower Fairies a drawing by Jude Cowell; all rights reserved

And for more Sun-Moon blend details see Sun Sign-Moon Sign by Charles and Suzi Harvey (yes, it's on Kindle!)

Posted by Jude Cowell at 6:39 PM No comments: