It's been known for some time that the wife of Ramses III planned to have her husband assassinated so that her son could become pharoah in his stead. But was the plot successful? Turns out it was.

Egyptologists have removed bandages from the ancient neck of Ramses III to reveal 'twas a sharp knife did the deed.

Watch out, Washington, for even 3,000 year-old crimes must eventually come to light and posting this feels as if I'm cooperating here with the current Solar Eclipse (which occurred on November 13, 2012 @21 Scorpio 56) for both Solar and Lunar eclipses tend to uncover hidden secrets--even those with ancient and distinguished petigrees!

For a peek at the November 2012 Solar Eclipse horoscope set for Washington DC with some Political Astrology details to describe it, visit Stars Over Washington where you'll also find the horoscope of its 'bookend' Lunar Eclipse of November 28th as well.

Year 2012 is ending under the rays of a difficult YOD planetary pattern of crisis and turning points which involves an aspect between Saturn (restriction, loss) and Pluto (power and control--together they often bring cruelty, brutality, and harsh conditions as on 9/11/01)--and directing their energies toward Jupiter Rx in Gemini, sign of young people such as the students of the Sandy Hook elementary School who were innocent victims of the Saturn-Pluto duo of brutality.

Can good come from evil? Well, Washington now speaks of "doing something" legislatively about America's culture of violence and how whatever is done must be done quickly before the impetus runs out. This is a common feeling with a YOD influence: that one must take corrective action while the opportunity is offered.

As a parent, and now grandparent, I hope legislators will ward off the politically powerful NRA long enough to put into place more common-sense laws such as closing the gun show loophole for our children and women in particular need protection in this paternalistic, testosterone-driven society.

At last this blog has been rescued from its recent redirect attack. For those who have a similar problem with a Blogger blog, try removing all widgets from your Layout such as Blogger's 'Recent Comments' or 'Recent Posts'. Clear your browser cache in between. This did it for 2 Hours anyway.

My thanks to skyewriter for giving me a heads-up on a handy fix-it page with info that Blogger won't tell us.

Posted by Jude Cowell at 8:02 PM No comments:

'Perception' and its interactive billboard in NYC!!

Have you caught the new TV show Perception starring Eric McCormick? I love it! Check out this video on the show's interactive billboard in NYC:

Posted by Jude Cowell at 1:14 PM No comments:

Are you familiar with the beauty and charm of the ancient isle of Western Crete? Or perhaps you're an armchair traveler like myself? Well, check out this 5-minute video that some of my more adventurous family members (one with a Mercury = travel/Jupiter = foreign lands conjunction in Aquarius) recorded in mid-May 2012 as they took in the sights...complete with some very appropriate music!

You may also wish to read of the History of Minoan Crete or of King Minos himself.

Why, even the author of The Scarlet Letter and other classics of American literature, Nathaniel Hawthorne, thought to write of Theseus and the (beastly) Minotaur!

If you've ever suspected your cat of harboring existentialist views within, the following video may confirm it...or not...who cares, right? Hey, doesn't Henri rhyme with ennui?

A peek at Jude's Sketchbook Project 2012! 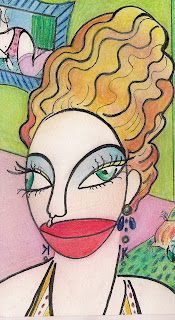 Since late 2011, I've been perpetrating new drawings for my Sketchbook Project 2012 Limited Edition as sponsored by the Art House Co-op whenever I find time.

Here you see an initial online showing of a fraction of one of the drawings, working title, Fractured Girl. She seems to have a bit of a 'seer' attitude, doncha think? Well, many of my drawings do unless they're of a more realistic botanical nature.

So if one day you should visit the Brooklyn Art Library you may look up my offering and see the entire shebang as you wish--an old-fashioned 'hard copy', that is!


Here are some particulars:

Also check out The Sketchbook Project online for I know you're about to get your Sketchbook in the mail by April 30, 2012 if you're part of the Limited Edition group. Having just completed documenting all the images, I shall mail mine this week if all goes as planned.

Fun Note: Sketchbook Project's Art Book Series is scheduled to be published in Fall 2012!
Posted by Jude Cowell at 7:35 PM No comments:

Hope for the Hopeless? (music video)

At last I thought to return to YouTube to search for Brett Dennen's performance on David Letterman from a while back. You see, when the music (and the beat) combine with apples-of-gold-in-pictures-of-silver lyrics that actually say something on behalf of human kind, the song often becomes a perennial favorite of mine.

Here, Heaven is performed live on Letterman and if you're unfamiliar with the song's message, perhaps you'll give a listen!


This song debuted pre-Occupy days, of course, but its message seems quite applicable to 99%/1% issues to this particular blogger whose nature is to operate within a Common Good persuasion.

Plus, here's another version of Heaven which I posted about 3 years ago including an interview with Brett Dennen if you're curious.

Now updated: Stars Over Washington. Politics. Tiresome. Agreed. But we look away from the varmints at our and our children's peril. Plus, through the lens of Astrology we may spy many squirmy little things wiggling behind the door...


Two WordPress Astro-Blogs I Cheer For: Julie Demboski's Astrology and Auntie Moon. Both ladies regularly provide excellent insights and useful information inspired by The Cosmos--on behalf of us all!
Posted by Jude Cowell at 11:20 PM No comments:

Today is Sabbath, the Seventh Day of the week in spite of what any hierarchical church leaders allege. And for some reason I feel like posting a bit of artwork here in a minute. Not sure which image to use so I'll mosey and search for something for you...

Ha! Since it's rainy & cloudy in Northeast Georgia at the moment, perhaps something with a first raindrop falling down...? 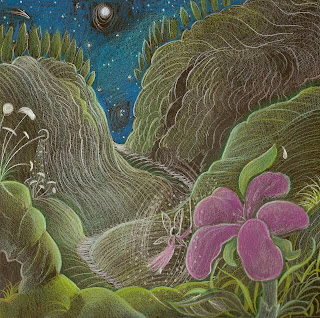 A Fairy's Secret Valley...click for a gallery of Children's, Botanical, Moon, and Cosmic Art images and I hope you'll share any one you enjoy with my compliments!

Other suggestions may include: Stars Over Washington, Jude's Threshold, and Sepia Art Theater, dahlink!
Posted by Jude Cowell at 5:09 PM 2 comments:

A blip in false reality? Philip K. Dick on the Real "Matrix" (video)

Don't know if both readers of this blog have any interest in the narrative of a false reality such as author Philip K. Dick writes of in Blade Runner (my personal favorite) and The Matrix, but here he is speaking at a convention in 1977 (the year of Chiron's discovery!)

Perhaps I can snoop out the exact date he spoke and possibly outed the true "Matrix" because I'd like to compare the planets on that day with Mr. Dick's natal planets, you know? See what influences were prevailing for him then...

And yes, I do think that *Chiron, discovered at 3Tau08--'4Tau' = "A Rainbow's Pot of Gold" is significant to the topic of false reality. The Sabian Symbol for '4Tau' is about blending the celestial with the earthly and the lasting benefits that derive therefrom. Taurus is an Earth sign (practical; materialism) and is nicknamed The Builder, The Architect, and The Gardener.

The Taurean motto is I Grow and architects of our false reality know just what I'm talkin' 'bout! Then we have politicians and in particular Washington DC politicians who are the political arm of the Great Enterprise.

All in all, we could go on about these things but to sum up I'd have to say, It's our separation from God that is at the root of all our problems, depressions, and delusions.

Until a person becomes aware of that basic Truth and how distant they have become from The Source of All Life, then every human construct is false and unstable.

If you're curious, view an astrodatabank image of P.K. Dick's natal horoscope here.

Born December 16, 1928 @ 12:15 pm in Chicago, Illinois, Mr. Dick's natal horoscope shows Uranus rising (ability to cope w anything--FDR was born w Uranus rising as well), Mars Rx at IC (Endings), and a close conjunction of Mercury and Saturn in Sagittarius, and Mercury/Saturn contacts are the 'signature of the professional writer," as Noel Tyl once said.

Plus, it feels synchronistic to me that as of recently, a transiting midpoint picture is once again formed between Jupiter (growth!), Neptune (fantasy!), and Uranus, planet of Futurism and Genius...


So do come visit me at Stars Over Washington when you can for Politics through Astrology's lens since that's where I mainly hang out online!

An Artist's Portrait of Gene Tierney

Is it overly brazen of me to publish my pencil portrait of actress Gene Tierney drawn in 1982? That's thirty years ago! Oh, well. Here I go celebrating the beginning of 2012 with an antique image from 1982...because I always thought Ms. Tierney was one of the prettiest actresses around! 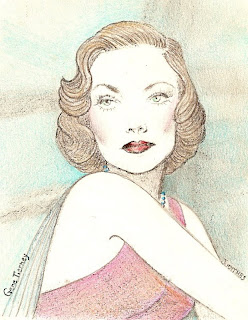 Gene Tierney's Wiki page states that she was "acclaimed as one of the great beauties of her day" or some such flattery. Check out the scoop on the star of the film Laura which still makes it into the Top Ten of many a movie buff's list!

Well, this may be my first post of 2012 on Two Hours, but with all that's going on in Politics, you know I'm often to be found at my primary Political Astrology blog Stars Over Washington, or alternately at Jude's Threshold, right? ;p
Posted by Jude Cowell at 7:19 PM No comments: