Yeah, well you know the time has come when the over-strapped US consumers' turnip blood is in short supply, so the Fed and their vampirish banking/credit buds should agree to curb overdraft fees on credit card accounts.

And though they'll never see the inside of a prison cell, credit lenders and other loan sharks have garnered years of ill-gotten, sneaky profits and now it's time to give up the profitable scam of padding balances with arbitrary fees that snowball out of all proportion to one's projected lifetime income. As the French say: impossible!

Is a massive grassroots movement needed to prod the cattle on Capitol Hill into mooing legislation that sets up fairer bargains for the long-unprotected (by them) American consumer?

Where is an online petition to sign and send to Congress when you need one?

Bet if I toss my browser right or left I'll kick into a wave around here somewhere... 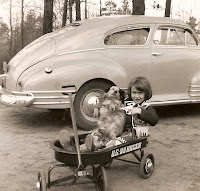 Now here I am in my varmint days pulling a heist on a shifty-looking if unsuspecting spaniel...but as you see, I was a child. These financial and political brigands are adults who presumably knew better, didn't care, and heisted as long as they could get away with it...and with nary a paw print or speck of evidence to mar the stories they're stickin' to.

In fact, given the world's 24/7 opportunities, some of them are heisting as I type!
Posted by Jude Cowell at 12:14 AM