June 30 is the 73rd anniversary of the publishing of Margaret Mitchell's novel Gone With The Wind so I must critique myself as a very bad southerner for not noticing sooner!

Miss Mitchell's novel won a Pulitzer Prize in 1937 with its depiction of the burning of Atlanta by Sherman's troops standing tall amongst the emotional angst and high romance of her well-drawn characters.

One of my fondest memories of my older sister is that she insisted on taking me downtown to see the film in spite of my parent's objections. That a 6-year-old should see Rhett Butler's sassy ways on the big screen is doubtful, but I thoroughly enjoyed the movie, its look and feel, the drama, flirtations, the beautiful fashions, and the southern manners and moxie.

Needless to say, I was completely won over by Gone With The Wind...and by those da*ned Yankees, too.

And naturally Brit actress Vivien Leigh became an instant favorite of mine though the controversy about her off-and-on again 'southern accent' still raged around me, but I didn't care and thought she was perfection in the role of Scarlett O'Hara.

In fact, I never got over my love of Scarlett's window-drapery creation of mossy green velvet with tassels and it probably undergirds (pun intended) some of my chiffon-satin-velvet drawing efforts of ladies and tasseled pillows over at Cosmic Persona Designs to this very evening.

Seeing and later reading Gone With The Wind also informed me of what I'd only heard mentioned when cotton fields still dotted my personal landscape - the slavery of human beings who looked exactly like people to me, and I never understood why they were not considered part of humanity by those who seemed more like animals for their cruelties, and were not anyone I'd like to get to know.

One example of this type of person was a landowner in Oglethorpe County, Georgia, by the name of James 'Jim' Smith who ran for governor twice in the state and lost both times. After a lifetime of hearing my father's tales of the man's cruel personality, I can only imagine how the monster's head would have enlarged from the swollen ego of a politician's victory.

Even now, not so far from where I sit and type into the night, there is a 'wide place in the road,' as my Daddy described in in later years, called Smithonia, Georgia. You can still see Smith's house, a two-story white number with a vault built around back, and one of his many barns still stands with a metal 'S' on its side. The vault was where King Midas counted his golden coins aplenty.

My Dad often told of Smith's railroad by which he transported bales of cotton and other products to port and to town, one of them being my hometown of Athens. All this was in the 1800s and into the early 1900s, of course, for that sort of plantation is long gone with the winds of time and change as was the fictional O'Hara family's way of life.

My Dad once heard the train whistles blow across the hills... 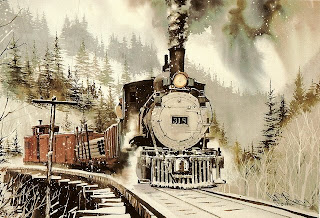 Since my father was born in 1908 on property next door to the Smith plantation which his ancestors had purchased from Jim Smith in 1821, he had memories of hearing Smith beating his slaves in the house. One can only imagine that such a hateful creature was difficult to please and I'm told that he became more cantankerous with age.

You've noticed that people seldom improve with age - if they were difficult in their younger years, they usually will only get worse as their aches increase! (I may resemble that cantankerous remark.)

Yet Smith played the stereotypical role of beneficent boss-dude, too, for each summer when the watermelons ripened he'd throw a huge picnic for everyone.

Some consolation that must have been.

But my Dad did say that it was always a good time for them all. With only birds for 'tweeting' and not much fun stuff going on around the countryside in those days, a big bunch of folks getting together for a pleasant reason would have been a huge deal. And you know how people back then appreciated good orators and expected them to speak for a goodly long time...even the politicians!!!

The Jim Smith Mausoleum is set upon a hill within historic Oconee Hill Cemetery in downtown Athens where some of my family members were buried long ago (from my Mom's side, too) but it's full-up last I heard so you'll be settling for an official tour rather than an eternal nap if you should mosey that way.

But don't let that dissuade you, for Athens is only an hour-and-a-quarter's drive from Atlanta and quite an easy route to follow, if you've a mind and a steering wheel. We have lots of art and music as always, and you might even see a famous personage floating around the streets (not the ghost of Jim Smith, silly! The dead are unconscious and know nothing and have no part in anything under the Sun, you know - that's why it's called Eternal Rest) yet perhaps a musician or two might meet your gaze.

If you visit be sure to drive down Milledge Avenue which has the happy circumstance of being studded still with lovely ante-bellum homes though most now belong to UGA's Greek fraternities and sororities. It's a similar situation to castles of the British Isles that have to do something inventive to keep afloat thanks to size and costs of upkeep.

The University's Greek system has preserved the homes, however, and the avenue is quite a lovely street upon which to be born (not inside a huge ante-bellum relic though! And I was not born wearing a hoop skirt nor do I sport a southern accent. Sorry, Folks.)

Here's a link with a virtual tour of my hometown, and quite surprisingly the site informs me that Kiplinger's has named Athens, Georgia the 5th best place to live for 2009!

Why, I do declare, Miss Scarlett, I believe we're coming up in the world!
Posted by Jude Cowell at 11:18 PM

Has there ever been a movie with good Southern accents? Act 3 of this was good http://www.thisamericanlife.org/Radio_Episode.aspx?sched=782

How true - No! there has never been an accurate southern accent done on screen by a non-southerner!

And you're very welcome for the link - thanks for the This American Life shout-out - I Love that show! jc