Zounds! It's hard to believe it's been four (busy) months since my last 2 Hours post so here is a sunlight-dappled Zasha lookin' mighty fine and a little snoozy! 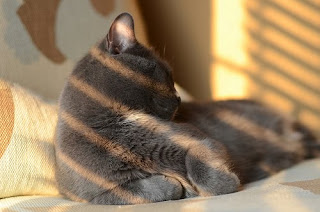 So where have I been blogging in the last four months?

Mainly at my Political Astrology website Stars Over Washington where you don't have to speak Astrologese to read what the stars have to say about Politics and politicians! Today's update: the natal horoscope (shown) of the GOP's anti-tax-hike political strategist Grover Norquist which will be 'hit' by the December 10, 2011 Lunar Eclipse in chatty, news-reporting Gemini--near US natal Mars.

As you know, all eclipses are considered 'wild cards' of the Universe and have the option to uncover secrets and scandals so stay tuned for that!