Is May Day but a Protest Day?

~
May Day is also known as International Workers Day and because of global economic meltdown caused by sorry governing and the banking class' greed for power, protests are occurring around the globe for May 1, 2010.

Russia has been seeing some point-blank placards for May Day 2010 such as, Putin is Stalin! among other issues, in part for what they term Putin's 'blind' economic policies.

Why, Vladimir is simply following the protocols of the New World Order which is precisely why today I am siding with workers the globe over and wishing them safety and relief from totalitarian governments the officials of which have allowed themselves to be tempted, suckered, or blackmailed into the one-world-government agenda of the likes of Weishaupt, Palmerston, Mazzini, Pike, and the current-day crop of satan and lucifer worshipers who want total control of you and me - and fomenting chaos is their typical method: break down society in order to build it back as you high-handedly envision.

This May Day, things are very heated and furious in Greece especially over their government's "austerity cuts" (which is what US politicians would call their long-hoped-for "entitlements cuts" here if they thought they could be more honest in public without having Washington stormed like the Bastille.)

Why, even a US Congressman was arrested today at an immigration rally in front of the White House!

Yet be it all as it may, there is a severe thunderstorm about to break here in northeast Georgia yet I cannot resist posting a recent photo taken (as usual) by my photographing daughter, Maya...so if you are located where you have the option, please enjoy a daisy bouquet for May Day 2010, everyone! 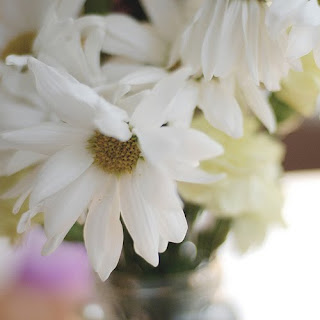