2 Hours You May Not Miss or How about a Drawing by Jude Cowell?


Okay, you caught me. It's difficult keeping up with so many blogs so why in the world have them? For one thing, attempting to delete a seldom used blog only causes trouble for the ones that are left for they tend to link to the deleted one and this creates quite a mess. So here is a posting of one of my drawings just to spruce things up around here with content that is actually created by yours truly though perhaps you've viewed it before, here or elsewhere: 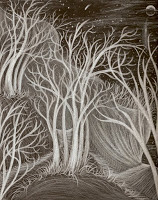 Image: Fork'd Way, a pencil drawing by Jude Cowell (c) 2016 - 2060; posted here in honor of the left vs right choice the American people face in the voting booth on November 8, 2016--as if we really have a say in who's (s)elected president. If you wish, visit Stars Over Washington for Political Astrology articles and videos on the 2016 Campaign and beyond.

Above image is on loan from Secret Moon Art but you are cordially invited to check out my new blog which premiered on Christmas Day 2015: Neptune's Silver Screen where you'll find horoscopes, bios, photos, documentaries, movies, and film clips of classic film stars with an astrological emphasis on glamour and love planets Neptune and Venus and where seductress Lilith and goddess star Sirius often sparkle. Popcorn optional!