~~
Whew! I just got my socks knocked off by reading Julie Demboski's God's To-Do List column now posted for April 2, 2010.

You see, chart-studying and blogging time in the last 2 weeks has been brief around here, yet I had wanted to delve more deeply into the current (yet waning) transiting YOD pattern (Finger of God: 2 or more planets sextile at the base and inconjunct or pointing to an apex planets/s; in this case the apex planet is Saturn, now re-crossing US natal MC in the Sibly chart - MC 00Lib53; Saturn is the planet of government, law, and business...this 'personalizes' the YOD for the US and makes it angular - able to manifest in the outer world, 10th cusp.)

As you know, YODs indicate a special task or purpose, a crisis, and/or a critical situation where square pegs must fit into round holes. They may have a 'genius' flavor to them as well for they facilitate the 'thinking outside the box' that can make the unwieldy peg fit.

Astrologer Erin Sullivan was the first person to alert me to the meaning and importance of YODs when she told of her realization that they symbolize the silver book marker of the Torah - a 'finger' showing where the next reading should be taken up. Thus the pattern's sacred and karmic flavor.

Often a harbinger of unfinished 'family myths' (for descendants to 'take up' in their lifetimes and complete, another good reason to know about one's natal chart!), and possibly pointing to health threats in a chart, we might expect mundane charts to show a desperate situation or two where YODs exist. Perhaps its 'special task or purpose' is more emphasized in national charts - and we definitely have a plethora of desperate situations to wrestle with.

Now you may be tempted to think, how bad can this YOD be when the base is a lovely sextile between Mercury and Neptune? Well, besides the general descriptions of Mercury/Neptune as 'deceit in communications' or 'messages/thoughts that inspire', etc, we may look to Michael Munkasey for political and business implications of Mercury/Neptune...

Leaders who can communicate their visions of growth and progress; a legislature that controls the excesses and dreams of its leaders; an enterprise that debates about its future; weak or artificial plans that must be rethought or redesigned; a leader who mesmerizes people with delusions of progress or growth (yowch! the president resembles that remark but so do other politicians - jc); an inability to bring reality into planning and productivity.

And what does Noel Tyl say about the midpoint picture formed by the apex-Saturn YOD which is now, thankfully, passing?

Mercury/Neptune = Saturn: a gloomy reaction to real or imagined circumstances; looking at the downside of things which may or may not be valid.

Now when you read Julie's column for April 2 you'll notice her mention of today's Moon reaching 00Sag. And when Luna enters Sagittarius, she will form for a while today the base of a YOD with Saturn and pointing to an apex Mercury 00Tau+ - two interlaced YODs to thicken the plot!

The combo of Moon/Saturn = an exercise of power by the common people; institutions that oversee and coordinate commerce, agriculture, or business conditions; statistics on production efficiency; an inability of an enterprise to grasp the intentions or needs of the people; lack of output or production from manufacturing and agricultural sectors of the economy; practical vs theoretical economics.

(As always with mdpt pics, any, all, or none may apply.)

Well, I just finished keeping half an ear on what President Obama was saying in North Carolina (C-SPAN Live) and the above pictures and YODs came to mind. But as far as your personal life goes, please check out Julie's article for her clear insights and suggestions because with Julie, I promise you won't be disappointed! 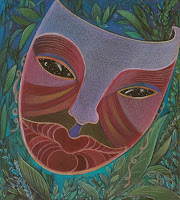 Image: Mask of the Cosmos, a visonary drawing by Jude Cowell.

Thanks, Julie! Yes, when Erin consulted on my natal chart and SR she was the most engaged and informative of all the world class astrologers who've read my chart (about a dozen!), and her seminars that i have on tape are still some of the most interesting listening around. ;p