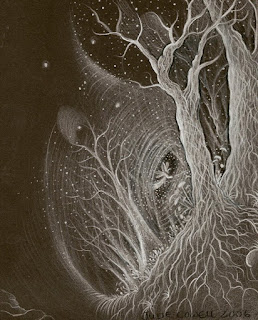 Georgia: Mysticism in the 13th Colony, an Enchanted Land

Since before the infamous Trail of Tears viciously removed Cherokee tribes and others from the region (for the sake of gold and US expansion), the area that is now Hartwell, Georgia was considered the Center of the World as were/are many other sites across the globe. A few miles hence lie what's been called by some "America's Stonehenge," the Georgia Guidestones--initiated in June 1979 by the mysterious 'R.C. Christian' and unveiled to a wary public on March 22, 1980 (horoscope, below).

Perhaps the pseudonym 'R.C. Christian' was meant to mimic the name of the alleged founder of the Rose Cross Fraternity, now known as the Rosicrucians--'Christian Rosenkreutz', as I believe it was intended to do. Certainly the radical ideas of the secret organization resonate with the 'New Age' ideas and political and social beliefs that are etched into the granite of the Guidestones and which promote a New Age of Reason. Some, if not all, of the Elberton enablers of Mr. Christian back in 1979/80 were Freemasons so draw your own conclusions there, as you wish. Certainly the men were accustomed to keeping esoteric and other secrets close to the vest.

As you may know, 'Mr. Christian' published a Paine-esque book explaining his Guidestones mission and objectives and from its title, Common Sense Renewed (download available), we find a deafening shout-out to the Age of Reason (or, Age of Enlightenment) as signified by the Uranus-Neptune pair which last conjoined three times in 1993 on or near '18 Capricorn' with its disturbing Sabian Symbol of "The Union Jack" (or, "A British Warship...").

The negative/shadow expression of the word picture for '18Cap' reveals what some have envisioned peeking through the ideas engraved in various languages upon the Georgia Guidestones which promote a major depopulation of the world (among other disturbing ideas): smug or strong-armed paternalism. SUPERVISION is the keyword for '18Cap' in the Jones version (The Sabian Symbols in Astrology) while Rudhyar's An Astrological Mandala describes it as: POLITICAL POWER. Either way, corporate Global Government only befriends the power elite class so to me (a native Georgian) the Georgia Guidestones' 'commandments' are anti-societal and reveal a draconian plutocracy agenda. Such ideas are all part of a centuries-old script, my friends, and no matter who wins the current US Election for president, the country and the world are stuck with the same old globalist script, no matter what the egomaniac Mr. Trump promises in his attempt to win the Venusian Oval Office. And Hillary Clinton? She obviously is a reader of the Global Government script and sold out decades ago as did the mainstream media.

So perhaps we should also consider the Uranus-Neptune midpoint at '18Cap' with transit Pluto, planet of power, wealth, stealth, and death hitting it off and on of late: the big picture commands a certain course of action, which must be followed; very little option to do otherwise. (Tyl). Might this describe an infamous 'offer they can't refuse'?

Now for your consideration, let's close this section with an excerpt from a page posted by some folks who visited the Georgia Guidestones in Elbert County, Georgia, in 1995 (my italics) which you may find interesting concerning the Hopi Prophecy and the Enchanted Land of the Cherokees:

The Hopi Indians and their ancient shamans say "signs" will foretell the time when the fifth world, a new age, will begin. Many believe we now stand on the threshold of changing events which will bring about the end of one world period and the beginning of another. Ancient prophecies state that when stone tablets are returned to the center of the world the new age will begin. There are varied interpretations in many different cultures regarding what "the center of the world" means and where it is.

Northeast Georgia was an assembly ground for the great Cherokee Indian Nation before the white man's greed for gold brought about the Trail of Tears. Cherokee Indian trails radiated in all directions from what is now Elberton, Georgia, and the Cherokee Indians held their Councils, their dances and their worship services of the Great Spirit there. They called the area Al-yeh-li-A-lo-Hee, the Center of the World.

Wonder if "Mr. Christian" was aware of the Hopi Prophecy about a 'new age' beginning when "stone tablets" returned to the Center of the World? If so, his and his Elberton enablers were only acting a mystery play as they pretended to consider other locations for the standing stones than where they were constructed upon Mr. Mullenix's hilltop.

A Natal Chart for the Georgia Guidestones

Since the videos I've seen of the March 22, 1980 unveiling show bright sunshine near noon or thereabouts, I've set the following horoscope for that date at the coordinates of the Guidestones (34N13 82W53) for an approximate hour of 11:00 am est. As you see, the Aries Sun is a day or so past Spring Equinox 1980 (did they miss their target date?) with a Gemini Moon all morning so we know the day has a Sun Aries-Moon Gemini vibe of Fire and Air, the 'live wire' combination of energies suggesting excitement, even nervousness, before and during the proceedings. Curiously, one of this blend's Images for Integration (Charles and Suzi Harvey, Sun Sign-Moon Sign) is "Haydn's Farewell Symphony"! Thoughts of the world beyond were apparently solicited that sunny morning by these mysterious hunks of Saturnian stones. Plus, the Sun Aries-Moon Gemini combo is known for its ability to persuade though of precisely what, you'll have to decide for yourself. 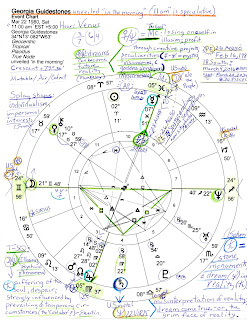 Please enlarge the chart to read my scribbled notes for this text will be brief.

Chart-ruler Mercury, planet of announcements, messages, and sight (an unveiling!), is in mystical Pisces and at Midheaven, the Goal Point, though Mercury makes no major applying aspects to other planets--other than a sextile to priestly Chiron (@10Tau59 and applying to goddess planet, Venus, which rules Taurus), with Chiron as the Seeker of The Quest. 'R.C. Christian' fulfills this knightly role or at least he thought he did. Anyway, A Mercury-Chiron sextile (60 degrees) suggests messages that "open new doors or stimulating ideas having to do with the process of self-transformation. It often happens that new input is not recognized as significant until sometime after it is received." (Chiron, Richard Nolle).

The Mercury-Chiron sextile also describes the architect of the project, the exacting Mr. R.C. Christian. 'Sometime after' is then, now, and in the future which is interesting since experiential Chiron The Centaur tells us to Be Here Now and orbits as The Bridge between planets Saturn (the past) and Uranus (the future).

Prominent in the Natal Chart

Now there are two angular chart factors that seem most prominent to me: a T-Square between the Moon-Neptune opposition which squares a 4th house Saturn, planet of stones, granite, monuments (including gravestones), and realism. Endings are also suggested which supports the themes of the Pre-Natal Solar Eclipse in the 18 South Saros Series (the current series as I type on August 11, 2016); you see 'PE" in the 9th house of Philosophy with details penned, upper right.

Also see lower right for Saturn notes and the transit of 1980 Saturn to US natal Neptune, planet of such things as: dreams, visions, illusions, the media, propaganda, toxins, negative escapism, and the masses. This is the grim reality vs dream come true transit and indicates Mr. Christian pouring an idealistic vision of Neptune into Saturnian stone thus bringing his dream into reality.

Penned on the chart in green is a second chart factor of importance: the Venus-Neptune midpoint at Midheaven which we may be tempted to dismiss since the MC isn't 'set in stone' (sorry!) since '11:00 am" is only a speculative hour. Still, this midpoint did pass over the scene at 11:00 am whether the ceremony began at that hour or not, and given the Rosicrucian link to planet Venus, the goddess planet whose flower is the rose, we might expect that the midpoint between lady Venus and Neptune, planet of illusion and mysticism, hints rather loudly at goddess idolatry and may denote other esoteric, pagan leanings associated with ancient megalithic sites such as Stonehenge in the form of Druidism.

Illustration, above: Spooky Moon with Fairy (c) a mystical drawing by Jude Cowell and check out my new Astrology blog if you wish: Jude Cowell Astrology where No Politics or politicians are allowed!